A family event movie from the creators of “Coraline” and “ParaNorman” that introduces audiences to a new breed of family – The Boxtrolls, a community of quirky, mischievous creatures who have lovingly raised an orphaned human boy named Eggs (voiced by Isaac Hempstead-Wright) in the amazing cavernous home they’ve built beneath the streets of Cheesebridge. When the town’s villain, Archibald Snatcher (Academy Award winner Sir Ben Kingsley), comes up with a plot to get rid of the Boxtrolls, Eggs decides to venture above ground, “into the light,” where he meets and teams up with fabulously feisty Winnie (Elle Fanning). Together, they devise a daring plan to save Eggs’ family. 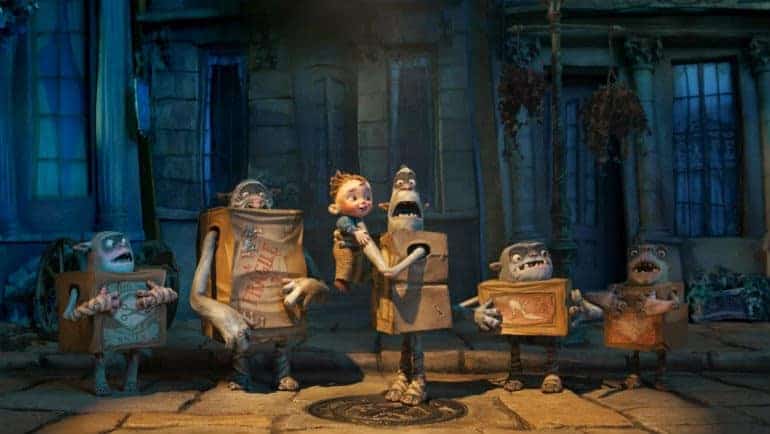 Directed by Anthony Stacchi and Graham Annable, the Boxtrolls is LAIKA’s greatest achievement yet. The amazingly detailed and artistically impressionistic visuals dazzle throughout despite an almost too simple plot and absurd themes. Based on a very small part of Alan Snow’s 500+ page novel ‘Here Be Monsters,’ it is easy to fall into the world of Cheesebridge and the Boxtrolls, especially when watching the film in brilliant 3D. The craftsmanship, artistry, and production design is nothing short of astounding. So much detail is incorporated into each of the sets, costumes, and characters that every frame (which were painstakingly crafted one at a time) seems like a miniature masterpiece. The colors are vivid and the textures are diverse. The keen eye will revel in the subtle multi-colored marbling appearance of all the various surfaces which the entire film the appearance of an impressionists painting.

It’s a simple search and rescue plot, but at only an hour and a half still manages to tell a complete story with plenty of hilarious moments throughout. Certainly some of the higher concept jokes and ideas in the film will go over the heads of the younger audience, but will still delight adults. The lengthy philosophical struggle endured by Snatcher’s Henchman as to whether they are ‘good guys’ or ‘bad guys’ were particularly enjoyable to watch.

While Coraline and ParaNorman seemed more aligned with the dark and macabre, for the Boxtrolls, those themes have been replaced with the absurd and grotesque. Personally I am more a fan of the former as I found some of the more ickier scenes in the Boxtrolls not terribly desirable. However, it is understandable that the filmmakers made this point of view change considering LAIKA’s earlier films have been regarded as a bit too scary for younger audiences. So the lighter more absurd tone, combined with the bug eating, cheese gorging, and cross-dressing will surely be received more favorably.

Let’s not forget the most important creatures, the Boxtrolls, who are the least “monster-like” in comparison to heir human counter-parts. They are wonderfully cute and harmonious ‘monsters’ that kids will undoubtedly fall in love with and may even want to venture underground to find one of their own.

The Boxtrolls is now available to own on DVD and Blu-Ray. 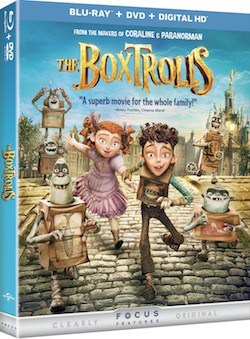 26 thoughts on “The Boxtrolls Brings Visual Brilliance in Dazzling 3D”