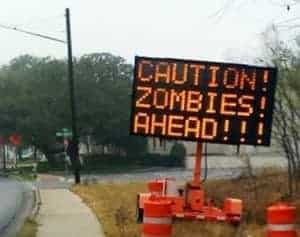 Take cover, we’re being invaded by the Walking Dead and they’ve started in Miami, Florida with a savage attack on a homeless man that involved cannibalism. The “Miami Cannibal” has been described as a sweet, kind and loving man by his mother and girlfriend. So what happened that caused him to turn savage, take off his clothes and viciously attack a homeless man by eating his face for a grueling 18 minutes?

Witnesses described the attacker, Rudy Eugene, as a “zombie” because the attack was so horrific and gruesome. Even after police were on the scene and shouting for Eugene to stop he “growled” and continued to tear at the man’s flesh.

The Twitter universe is on fire with speculation about the Zombie apocalypse and the Zombie Virus! How can we protect ourselves from the Zombie virus or LQP-79? Unlike measles or the flu you can’t go to the Doc in a Box on the corner and get a vaccination for it.

What exactly is LQP-79 anyway and what caused the Miami man to go mad?

All it took was for someone to say “Zombie” and enthusiasts of a Zombie apocalypse began to blame the attack on the Zombie virus aka LQP-79. According to Snopes, LQP-79 is not a real virus but something we’ve created as a Pop culture phenomenon as an increasing number of people become fascinated/obsessed with Zombies/Vampires and the walking dead as fueled by Hollywood.

The facts are horrific and some might find comfort with a valid explanation, but I’m not sure discovering Eugene was a “Zombie” and this is the beginning of something bigger is comforting. Here are the facts that have fanned the flames of Zombie fans: Eugene was consuming the flesh of another person, he was unresponsive when ordered to stop and did not react after being shot, and he growled at the police officer.

How can you explain his behavior other than to say he was a Zombie? Eugene’s girlfriend says he was either drugged without know it or a victim of VooDoo. The girlfriend say she’s never believed in VooDoo until now but can’t think of another explanation.

Can the story get any stranger?

Well, actually yes it can, toxicology results aren’t in yet but authorities believe he might have been high on the new designer drug of choice called “bath salts.” The ingredients in “bath salts” Methylenedioxypyrovalerone (MDPV), mephedrone, and pyrovaleroneave form a toxic combination of stimulants that can lead to psychotice behavior. Bath salts users may experience hallucinations, lose touch with reality and can easily become overheated. (which may explain why the man was naked)

Previous users of the drug say while “Bath Salts” are unlike any other narcotic, they resemble the high felt with a mix of cocaine and an amphetamine.

YIKES! This is frightening and not a laughing matter for sure, but real Zombies? Come on – just the idea that a Zombie virus exists, makes me laugh.

What do you think? Should we start making and selling “Zombie Kits” just in case?