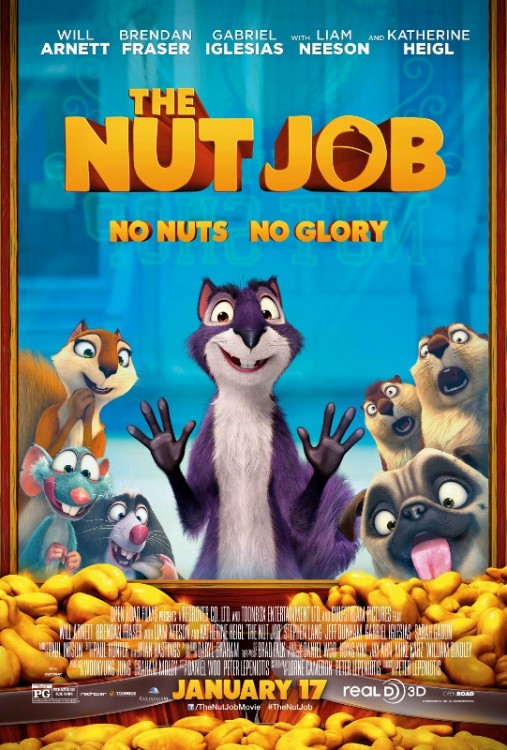 Will Arnett may be best known for playing Gob Bluth in Arrested Development, but he actually has several animated movies under his belt. I’m a big fan of his, so when I found out that I would be attending the Los Angeles premiere for The Nut Job, I was very excited! After watching the movie, I think it’s safe to say that this will be another hit for Will. It’s a funny and lively movie, touching on themes such as teamwork, loyalty and friendship.

In the beginning of the movie, you meet Raccoon (voiced by Liam Neeson), who is the leader of a crew of animals in Liberty Park. Raccoon instructs squirrels Grayson (voiced by Brendan Fraser) and Andie (voiced by Katherine Heigl) to hit up a nut cart located on the edge of Liberty Park. The problem is that Surly and Buddy are also targeting the same nut cart! Through a series of mishaps, the nut cart is upended. It’s a fun action sequence that you’ll just have to see to believe!

The park animals blame Surly for the nut cart accident and his punishment is to be exiled to the city, never to set foot in Liberty Park again. While in the city, a pack of mean and hungry rats follow him. Naturally Surly tries to evade them, resulting in a great chase! Buddy, his faithful rat sidekick, shows up just in time to help him and eventually they land on their feet in front of a store front. However it’s not just not any store front…it’s Maury’s Nut Shop!

Surly and Buddy make their way inside, only to overhear a plot by the robbers who are planning a bank heist. They discover that Maury’s Nut Shop (which is protected by a feisty pug named Precious) is just a cover for the thieves. Can they seize all of the nuts in the store without alerting the robbers?

Meanwhile Andie and Grayson once again leave the park with orders by Raccoon to find food for the park animals. They get separated and Andie meets up with Surly outside of Maury’s Nut Shop. Through a funny twist of fate, Andie takes hold of the instrument that will help Surly succeed in getting access to the nuts. The two squirrels strike a deal to work together and split the proceeds 50/50.

Are Surly and Andie able to work together to gather enough nuts to save themselves and the animals of Liberty Park? You’ll just have to watch it and find out!

My daughter and I were thoroughly entertained by this movie. It has humor, heart and high energy! One tip, make sure that you stay through the end of the toe-tapping credits.

Open Road Films’ “The Nut Job” is an action-packed comedy that follows Surly (voiced by Will Arnett), a mischievous squirrel, who must plan a heist to get into his town’s biggest nut shop in order to help his pals in the park gather food to survive the winter. Together with his sidekick, Buddy, he will assemble a ragtag crew to help him get inside – and take them on a fun-filled adventure that they’ll never forget.

Images courtesy of Open Road Films. I attended a press event for this film. All opinions are my own.

1 thought on “Nuttin’ But Love For The Nut Job”