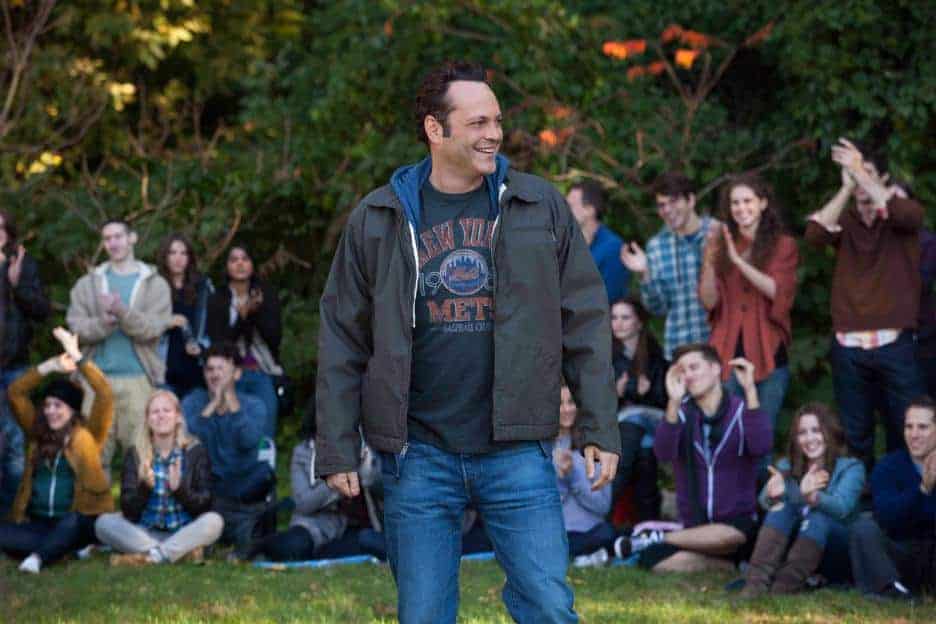 In the film Delivery Man, Vince Vaughn stars as average-joe type David Wozniak, who becomes confronted with his place in life when he is informed that he has 533 children through his sperm donations in college. As if that wasn’t enough of a bomb, 142 of them are suing to reveal his anonymity. Luckily, Chris Pratt plays David’s best friend Brett, who is a lawyer turned stay-at-home dad just begging for a big break lawsuit. Cobie Smulders plays David’s girlfriend Emma, whose unexpected pregnancy only complicates David’s series of choices for fatherhood. I had the opportunity to speak with all three stars of the film on their thoughts on relating to their characters in Delivery Man, as well as their real lives as parents and actors.

Vaughn: “I think what’s great about the character of David is his capacity to love.  I feel like it’s impossible for him to resist kind of trying to reach out and have a connection.  So I think that’s nice.”

Pratt: “In the film we see you transition into this guardian angel who then starts to become like a cheerleader for your children.  I wanted you to kind of elaborate on how parents do that, how your character did that especially the type of character you had. You were struggling to even get yourself together.  So now all of a sudden you are doing it for your kids.”

Vaughn: “I think what happens is he’s sort of presented with this circumstance, and he kind of approaches it wanting to sort of be all things, and then is sort of presented with the actual reality of that.  My job was made so easy with both Cobie and Chris because a lot of my character is taking information about how they see me, or the character I should say, and kind of these points of view.   There is I think a nice relationship between the characters in the film, but there are also real points of view about the character.  So I felt like it was easy coming to work with both of these guys having them really say things, and you’re really just reacting to that.” 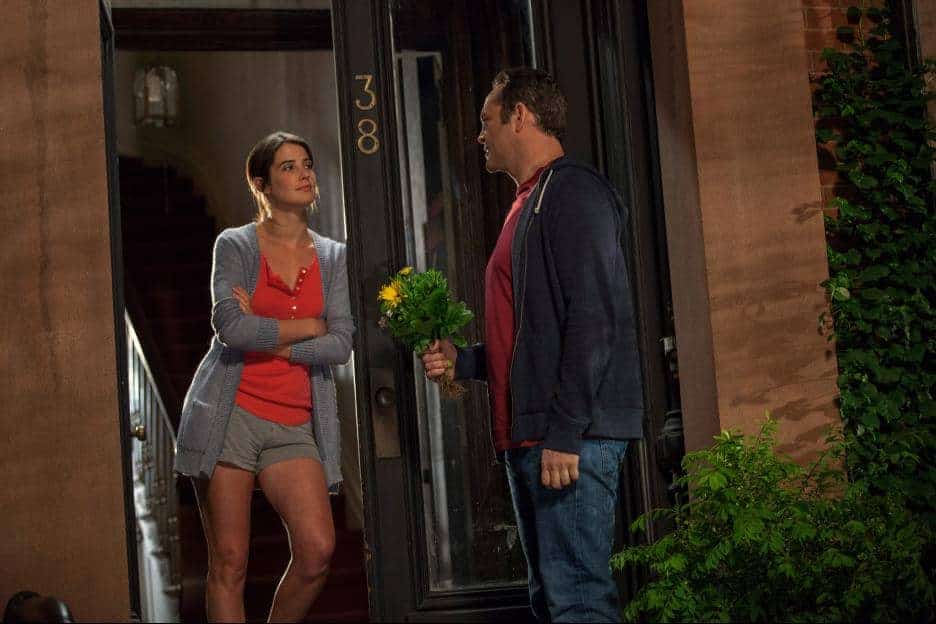 If you’re familiar with any of the actors in this film, then you know that they’re all known for their comedic chops, but Delivery Man isn’t your typical LOL movie. There are many moments of intense emotion that make the film quite serious.

Vaughn: “I think for all actors, it’s fun to do different things.   I don’t know how you guys felt, but didn’t you guys kind of enjoy that each day kind of required something a little bit different?”

Smulders: “Yeah, I think that especially with our relationship it was either we were like screaming at each other, or we were very much in love.  So we got to play a lot of different degrees of things, yeah.”

It’s no secret that Vaughn has had a successful career, and with Pratt’s big screen career blooming in the last few years, he’s still learning and growing as an actor and had nothing but praises for Vaughn.

Pratt: “I learned so much from watching Vince not only just in terms of acting and being professional and being sharp on set, but also how to treat your fans when they approach you and stuff.  I mean this guy anywhere he goes he gets recognized, which is something that I don’t necessarily have that I’ll get recognized from time to time.  But really Vince can’t go anywhere without being confronted by people who just really love him.  That sounds like it would be really great, but I think after a while that can be overwhelming, and I never once saw him treat somebody poorly.  He treated his people really well.  We were in Madison Square Garden with thousands of people, and they all knew who he was, and that’s where he took like, he gave every single one of those people a little moment, a little piece of himself.  I think that’s something I’d aspire to do.  I just want to work with people who are going to keep teaching me kind of like this one.” 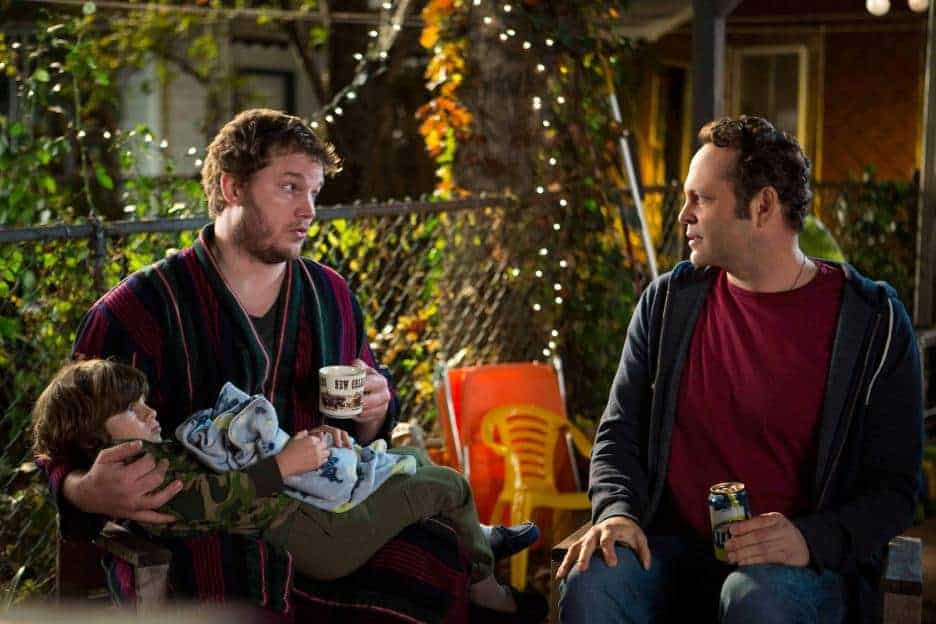 Parenthood is a subject that all three actors can relate to, and each of their journeys as parents has highly impacted the way they view the world. Ultimately, I think their real lives had a significant impression on their ability to play characters going through parental struggles.

Smulders: “You become responsible for a human being, and I think a lot of people talk about like I’ve never felt love like this before.  And you hear all these things before you have a child, and they’re all kind of true.  And, yeah, I think it’s just dealing with the overwhelming responsibility of like I’m the protector of this child that affected me the most.”

Pratt: “Oh, yeah, you can’t help but change when you have a kid, and for me it was just a sense of I didn’t feel like anything was missing in my life and it wasn’t.  It all came at just the right time, and now if I am absent from my son, I do feel like something is missing.  But before that I was very fulfilled and I was having a lot of fun, and I was sowing wild oats and doing the kind of things that you should do when you don’t have kids.  Now, I’m just doing less of that, but I earned it, you know.  Like I feel like just spending quiet evenings with my wife and son and sitting in bed in the morning and watching him marvel over the curtains opening or whatever little thing, that all it feels really good.  And so, I’ve changed because like I’m impressed.  What’s funny is the way I’ve changed is I’ve got a whole new window through which to see the world, and everything is exciting for me again.  Things that I took granted are exciting for me again, the way something feels or smells or tastes or how drawers open.  I’m like, ‘Look at that, kid.  That is actually really cool.’  It’s like just a wall with a knob and then you pull it, and there’s a bunch of shit in there.  What is that about?   I wouldn’t take a minute to appreciate a draw before my son.”

Vaughn: “I think it’s true.  I think you definitely get a whole world opened up to yourself with kids, and I think as a parent you try to enjoy them, and be happy and have fun.  And, also try to figure out what’s the best way to be a parent to them and set them up to be happy in life and pursue those things.  So, I think a lot of it for me goes to my relationship.  I’m very fortunate with my wife, and we were just talking when we were sitting down, and you realize how much the relationship when kids are young can suffer. And it’s important to make sure that you are able to spend some time with each other.  I think as a father, the best thing you can do for the kid is to love the mom.  Even as a parent I believe that loving the mother is the most important thing.  And even parents who maybe aren’t together I think that’s important for them as well to respect each other and to be kind to each other.  Because I think it does so much in who they would pick to be around, or how they feel about themselves.  So I think sometimes how we communicate is important just an example.”

Images courtesy of DreamWorks. I attended a press event for this film. All opinions are 100% my own.