We’ve already fallen in love with Thor, and thankfully, he’s back in his third live-action film appearance with Thor: The Dark World. In case you missed him in Phase One of the Marvel Cinematic Universe, Thor is the son of Odin, King of Asgard. In the universe, there are multiple dimensions: one in which Earth exists, and another where Asgard is part of nine super-powerful realms. Thor’s adopted brother Loki, possesses the power of illusion, teleportation, and shape-shifting among others, while Thor has super strength, flying ability, and weather control. Loki’s bitter history frequently leads to his desire to overrule in multiple dimensions, but Thor has been able to prevail for good over Loki and other villains with the help of his hammer, Mjolnir.

Now that everyone is caught up to speed, we begin in the second Thor film. Loki (Tom Hiddleston) is in Asgardian jail after trying to rule Earth, and Thor (Chris Hemsworth) is protecting other realms by fighting battles and bringing home prisoners of war. Astrophysicist Jane Foster (Natalie Portman) has been blue without hunky love interest Thor, but when she discovers a vortex and is transported to another realm, he returns to Earth to find her. While in the other realm, a hidden and nearly all powerful weapon called Aether uses Jane’s body as a host, so Thor brings her back to Asgard to analyze the weapon and protect her from the Dark Elves, who will come to reclaim their weapon after Thor’s grandfather previously annihilated the Dark Elves thousands of years prior. 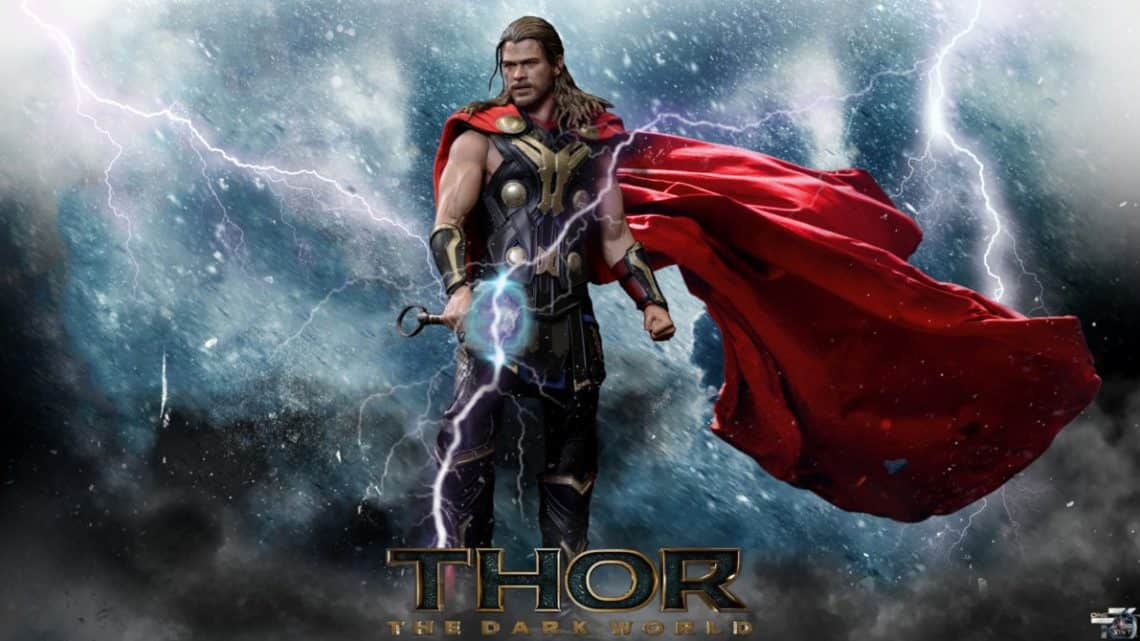 When the Dark Elves have a Kursed (Adewale Akinnuoye-Agbaje) warrior, who sneaks into Asgard as a POW and soon jailbreaks himself and begins tearing apart the Asgardian defenses for leader of the Dark Elves, Malekith (Christopher Eccleston), to invade and claim the Aether out of Jane’s body. Thor instead trusts in his warrior team and Loki to help destroy the Aether in the Dark World to prevent harm to any more beings.

While avoiding as many spoilers as possible, I’ve got to say that we did not get enough Loki time. That sly devil has cleverly bitten into my heart in a way that Thor’s abs cannot. My favorite scene in the movie contains a heart to heart with the brothers as Loki rots in jail. Hiddleston again impressed me with a deep understanding of Loki’s emotional complexity. On the other hand, Jane’s intern Darcy (Kat Dennings) got more screen time and a love interest/fellow intern (Jonathan Howard), which made for some adorable comic-relief, but honestly Loki’s quick wit could have easily replaced their short sub-plot. Likewise, Dr. Erik Selvig (Stellan Skarsgård) went off the mental deep end to create more sub-plot, which could have been omitted for more depth into female Asgardian warrior Sif (Jaimie Alexander). The feminist in me really just wants Sif to be explored more as a character and as less of a competition to Jane, because women don’t need to be jealous to be interesting. I will say that sacrificing potentially extensive jealousy plots with Sif and Jane was worth less Sif screen time, so I will be satisfied with what we got (and as always, beggars can’t be choosers). Jane also did have some pretty smart moments as a scientist, but for someone with multiple PhD’s, you’d hope so.

Thor: The Dark World‘s strength is definitely in the special effects. The animation of the Aether is stunning, as is the Bifröst Bridge that connects into Asgard. Live-action 3D films have narrow margins between being hokey and being underused, and this time, the 3D effects are highly underused, with the exception of captioning during the Dark Elves speaking. Whether you see it in enhanced versions (like IMAX or 3D) or not, you will be happy to see tons of foreshadowing and consistency of circumstances that keep the ensemble-like film cohesive.

For those following the Marvel Cinematic Universe like me, two post-movie scenes reveal what’s to come. So don’t get up when the credits roll! A potential new villain is revealed in the scene where Sif stars (which I’m hoping is foreshadowing to her future prominence in the series), and Jane is revisited in a light-hearted scene to leave you feeling the theater warm. The film also explicitly states that Thor will return, but I had no doubts of that before.

The bottom line is Thor: The Dark World is a great movie for Marvel fans and non-geeks alike. Though some of the Nordic names may be confusing, it’s a thrilling movie for pre-teens and teenagers, or a great excuse to splurge on IMAX for date night.

I attended a press screening of this film. All opinions are 100% mine.