When Kia announced they would be introducing the all new 2014 Kia Soul in Minneapolis, quite a few people were scratching their heads thinking, “Really, Minnesota?” But Kia was on to something and I knew right where their head was at. The list of reasons why Minneapolis is a fantastic place to visit and live is growing as fast as it’s population. The city is a combination of rich architecture, natural beauty and urban sophistication and people are starting to take notice. Food and Wine Magazine is constantly raving about it’s trendy restaurants, it’s regularly voted as one the top most trendy cities in America, and the music and arts scene is explosive. And, if there is a “top 10” list for something – from being green, to walkability and even the ease of making friends – Minneapolis makes it.

If you’re a Gen Y or a Millennial (not coincidently the target market for the Kia Soul) Minneapolis is THE place to live, work or visit.

In classic Kia’s Press Event style, I found myself checking in to Minneapolis’ #1 hotel, the Graves 601. I gladly accepted the day of rest and hospitality before committing to spending 6 hours on the road the following day. The planned route was gorgeous, steering us away from downtown and accelerating onto freeway as we wound our way out of the city and down country roads through quaint towns in Minnesota. Along the way, I was able to really get a sense for the 2014 Kia Soul. 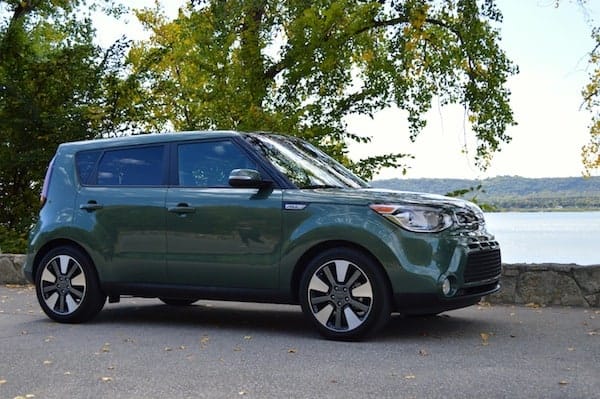 Let me start by saying that I honestly was not a fan of the previous model of the Kia Soul. Even though I’m clearly in the intended demographic, the car simply felt “too young” for me. It’s boxy shape was too square, and just too something that I can never quite put my finger on. Despite only some minor changes to the 2014 edition, they did a great job of making the car feel more “grown up” while still retaining the hip feel. It’s softer curves, wider wheel base, shorter height and clean lines give the 2014 Kia Soul that other something it was missing and I’m loving it. 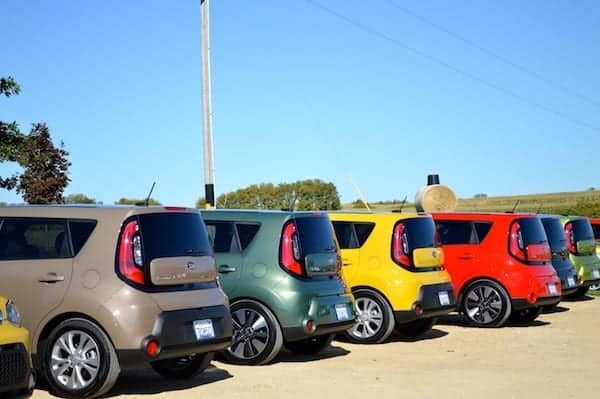 Additionally, the 2014 Kia Soul now comes in 7 color options. They kept the bright colors previously offered, and added some more muted colors that I feel enhances the “grown up” look.

But you know what they say, it’s what’s on the inside that counts. The Kia Soul is inspired by music and you can see that influence heavily in it’s design. To begin, with it’s 8inch LCD screen is huge compared to the 5.5inch you’ll find in most cars. It also features something completely new, a dual screen. This is great for people like my husband who are constantly fiddling with music, while still using the GPS. 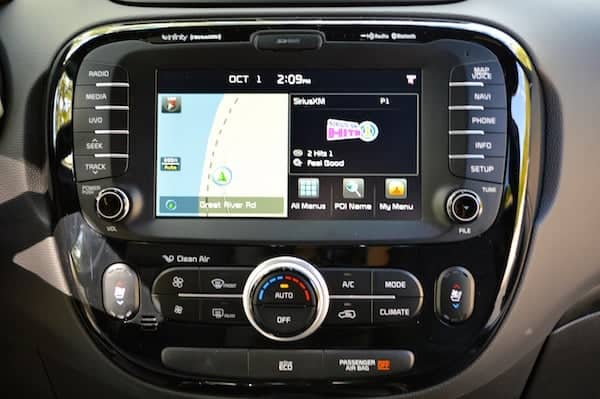 Of course, the Soul is also loaded with what I’ve come to recognize as standard for Kia (and I mean that in a good way) including an: AM/FM/CD/MP3 Audio System with SiriusXM satellite radio, Bluetooth wireless technology with steering wheel-mounted controls, a USB and an auxiliary jack, along with 6 speakers.

While we’re on the subject of speakers, at the request of Kia, Harman Audio designed a completely new speaker set up that is truly one of a kind. It’s a small detail but really speaks of the overall concept and theme of the car. You know what standard speakers look like in a car, they don’t vary much right? Well check out the new Kia Soul and it’s funky new raised speaker with a purpose – to provide sound rich driving experience. 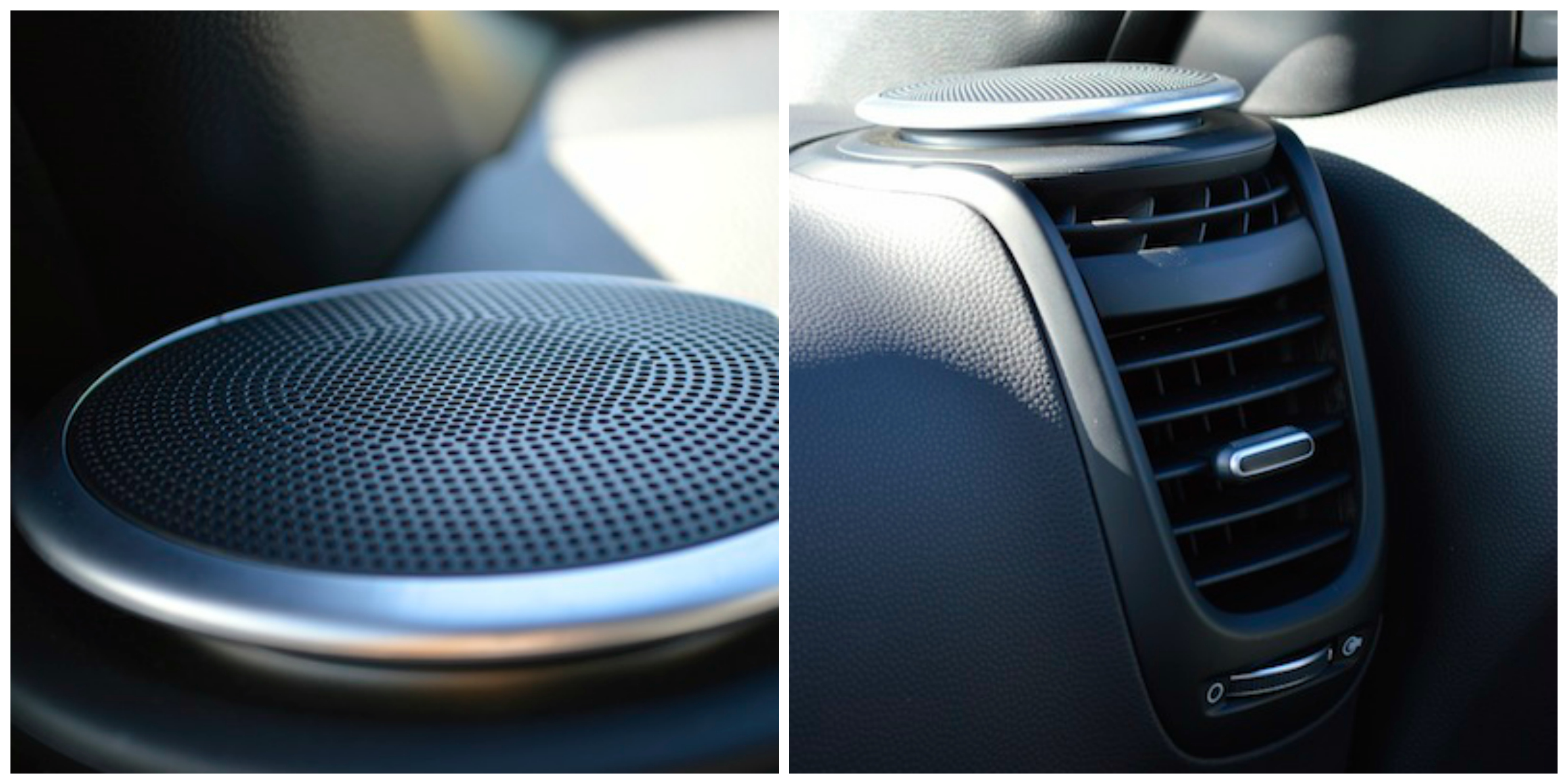 I’m also a fan of the latest new technology feature of 2014 Kia Soul, what Kia has coined a “redundancy screen”. Let me explain. Have you ever been driving along, listening to your GPS when all of a sudden you have 2 lane changes and 3 turns within a mile? It can get confusing, right? Most of the time I end up nearly missing my next turn because I’m busy swiveling my head from the GPS to my surroundings. The redundancy screen takes care of that. 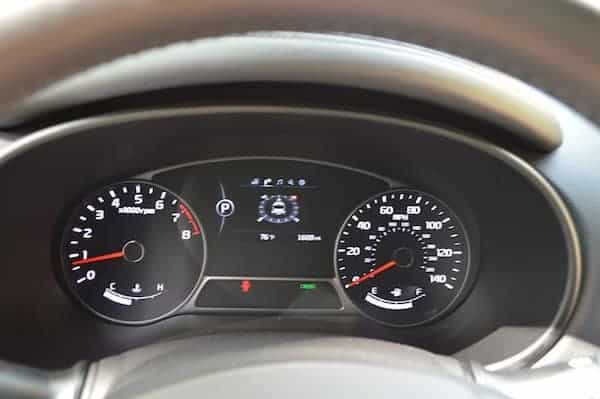 So what is it? Well, it’s this handy 4.5inch screen located right between the RMP and MPH gauges. Not only will it show you your next direction when the GPS is in use, it also displays music, and trip information.  Handy, right? 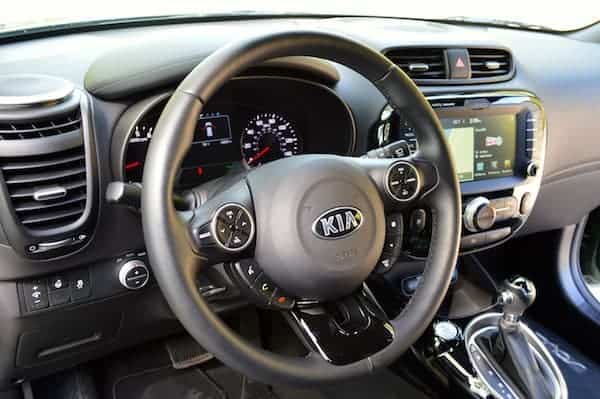 I’m happy that the 2014 Kia Soul retained some of my tried and true Kia favorites – like a design that is built around the driver, climate control, the UVO Infotainment System, ECO Boost, great MPG at 24 City/30 HWY and last, but not least, the rear view backup camera. As always, Kia has managed to pack incredible value into the 2014 Kia Soul with a base price starting at only $14,700.

Over my short three days with the 2014 Kia Soul it was apparent that Kia went a long way to deliver a loaded car with great value and high curb appeal, perfect for Urban dwelling Gen Y’s ( Millennial’s).

Thank you KIA for covering my expenses during this press trip as well as allowing me to drive the 2014 Kia Soul. All opinions are always my own.