Did you know the very first known lighthouse was built around 280 BC in Alexandria, Egypt? The massive lighthouse sat at the entrance to Alexandria’s harbor and was referred to as the Pharos of Alexandria. It stood over 440 feet tall and existed for over 1,500 years until it was destroyed in an earthquake. This lighthouse was known as one of the Seven Wonders of the World.

An increase in the construction of lighthouses started in the 17th century as travel on the high seas also increased. By the year 1900, close to a thousand lighthouses had been built within the United States, but many experts estimate the existence of 50,000 around the world. Technological advancements have made most lighthouses obsolete, but they still stand as beautiful marks of history and a not so long ago way of life. The haunting solitude of these lighthouses is eerie yet captivating especially when you think of the once necessary lighthouse keepers that lived to protect incoming ships. Here are seven of the most beautiful lighthouses found right here in the United States. 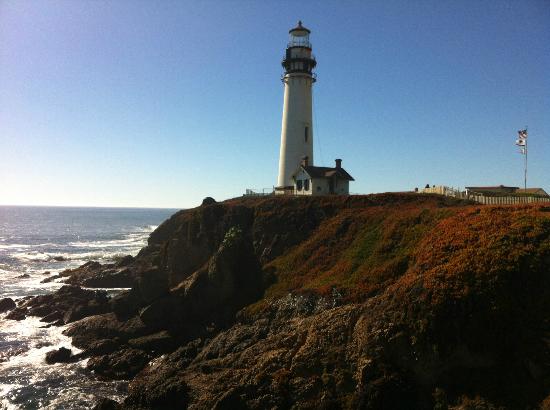 Built in 1872, Pigeon Point Light Station is 115 feet tall and one of the tallest lighthouses in America. It is currently an active U.S. Coast Guard aid to navigation. There is also Pigeon Point Lighthouse Hostel nearby so you can spend the evening in a quaint hostel and enjoy the ambiance of the cliffside as well as the towering lighthouse against the California sky. Right from the shore seals and even gray whales can be seen. From January to April the gray whales makes their annual migration and visitors can watch them travel from the boardwalk. Only 100 yards north of Pigeon Point over 150 species of birds reside in Pescadero Marsh. Ano Nuevo State Park is also nearby which is the breeding site of northern elephant seals. Visit the 142 year old lighthouse and enjoy a whole weekend of site seeing as well. 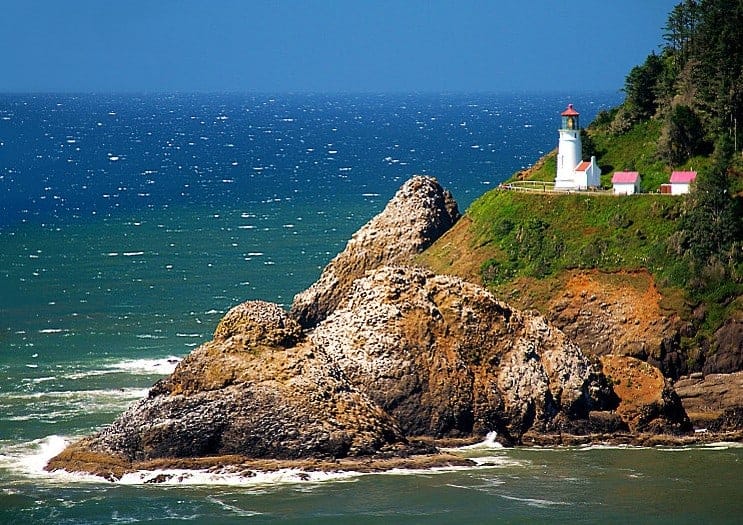 Located in one of Oregon’s State Park, the Heceta Head Lighthouse State Scenic Viewpoint is one of the most photographed lighthouses on the coast. It overlooks a cove at the mouth of stunning Cape Creek. The automated beacon on the 56 foot tower can be seen from 21 miles away, and it is rated the strongest light on the entire Oregon coast. Neighboring Heceta House was built as the assistant lighthouse keeper’s home, and it now offers rentals as a bed and breakfast. Seven miles of hiking trails snake through the beach and wildlife area offering views of bird nesting regions, sea lions, and whales. Enjoy the beach and go for a swim or spend the afternoon casting a line. 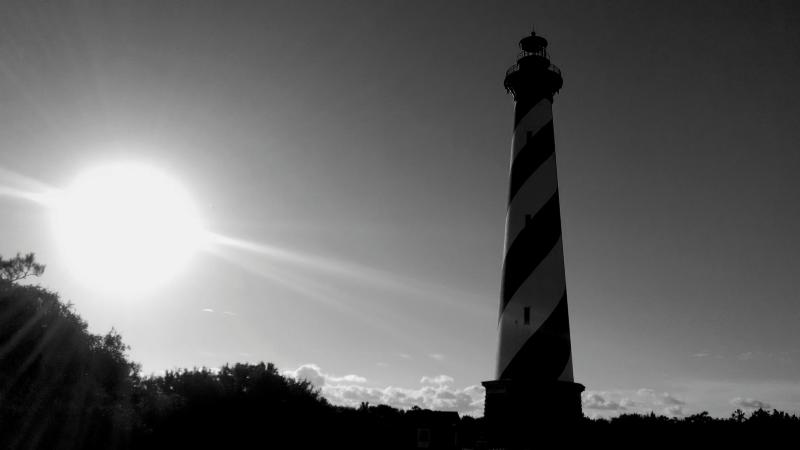 This lighthouse is actually one of three originally built for Bodie Island. The first lighthouse commissioned in 1847 was constructed under the guidance of a man with no lighthouse experience, and two years after its completion, it began to tilt on its uneven base. It was quickly abandoned. In 1859 another lighthouse was built but eventually blown up by Confederate troops during the Civil War in order to deter Union forces from using it. Finally, in 1871 the last lighthouse was constructed where it still stands along with the keeper’s quarters at the National Park in Cape Hatteras. Visitors can purchase tickets to take a guided tour and climb the lighthouse. There are also monthly full moon climbs from May through October. The National Park also has nearby camping, fishing, hiking, nature viewing, and waterfowl hunting. Full of history and beautiful sights it is well worth the trip. 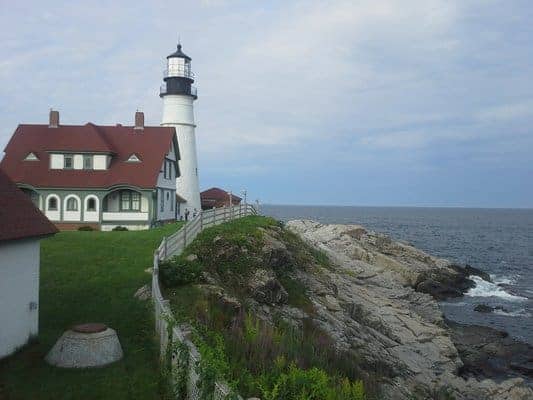 In 1791, President George Washington selected the first light house keeper for Portland Head. On January 10th of 1791, the light shone for the first time using sixteen whale-oil lamps. Now, with over 200 years of service the lighthouse is maintained by the coastguard. It is open daily for tours and features an award winning museum located in the former keeper’s quarters. Some of the former residents and visitors have even claimed this lighthouse to be haunted! But reports have said it is a friendly ghost. Next to the lighthouse is Fort Williams Park with hiking, recreational sports, picnic areas, and other historic monuments. 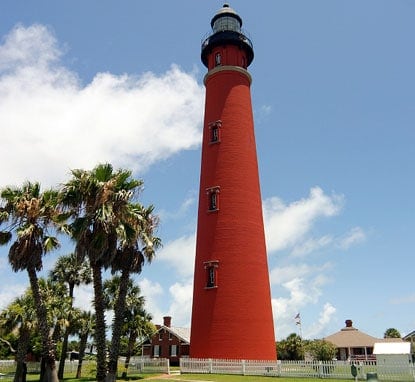 Just ten miles south of Daytona Beach this lighthouse is not far from many of Orlando’s popular attractions. It is the tallest lighthouse in Florida and one of the tallest in the country at 175 feet. Visitors can climb the 203 steps and look out at the water from the gallery deck. Originally known as the Mosquito Inlet Lighthouse, the land was bought in 1883 and construction began soon after. Sadly, the Chief Engineer and three others drowned in the inlet while it was being built. However, within three years it was completed in 1886. Many keeper’s operated the lighthouse until 1939 when the Coast Guard took over ownership. During World War II the buildings were transformed into barracks for guardsmen. In 1970, the lighthouse was completely abandoned and vandals caused extensive damage. Eventually, citizens urged for its restoration and the property was deeded to the Town of Ponce Inlet and the Ponce de Leon Inlet Lighthouse Preservation Association was founded. The non-profit organization restored the lighthouse and started a museum on the property which hosts over 140,000 visitors a year. 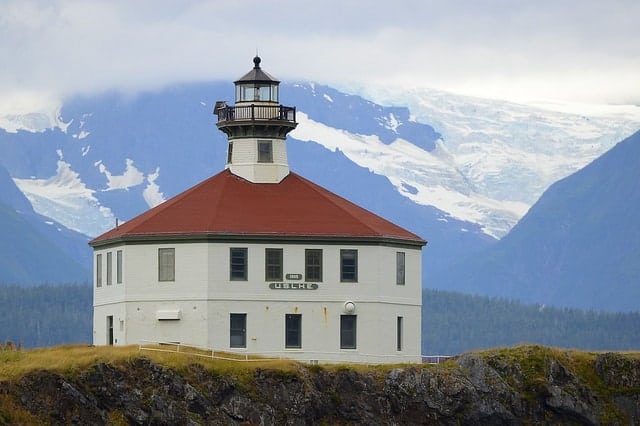 This is the only surviving lighthouse of the many of the octagonal wooden ones built between 1902 –1905 shortly after the gold rush in Canada’s Yukon Territory. Because many of the first lighthouses were built from wood, they did not survive the years of hard weather. However, this lighthouse is the oldest one in Alaska most likely due to its strong concrete foundation. Its construction was prompted by the shipwreck of the Clara Nevada. Reportedly, the ship was carrying over 800 pounds of gold, over one hundred passengers, and an illegal load of dynamite. The ship ran into Eldred Rock and exploded. It was believed that everyone perished; however, the Captain and a few other crew members were discovered alive and well after the explosion. Whether it was an elaborate set up to steal the gold or an accident, we may never know, but the incident prompted the building of the lighthouse. It is only accessible by boat or plane, but the views are breathtaking and the history is intriguing. 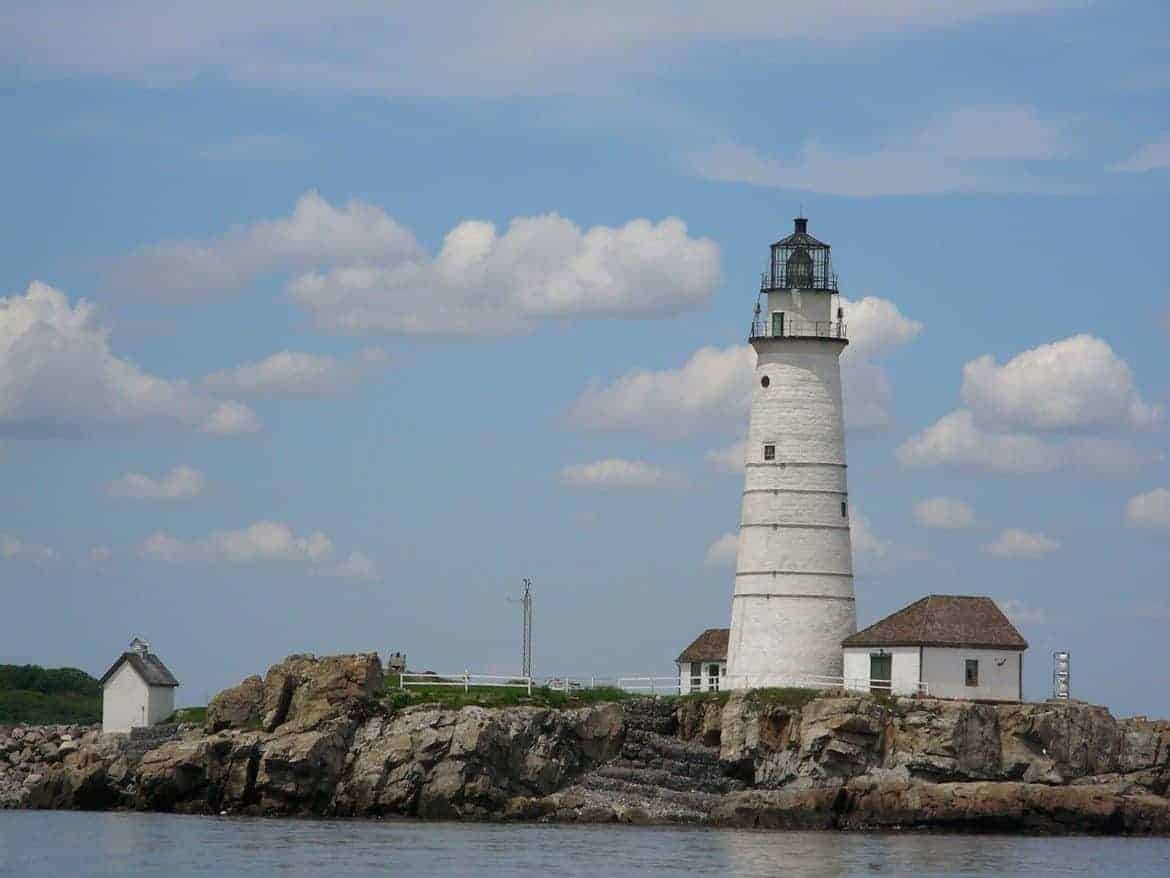 As far back as 1675, settlers would light bonfires on the hill that overlooks Boston Harbor in order to guide ships. In 1715, the Colony of Massachusetts used 2,400 British pounds to build a lighthouse which was the first one built in the new world. However, this lighthouse was eventually set a blaze not once but twice after the Boston Tea Party. Eventually, a keg full of gunpowder demolished the lighthouse and sent a strong message to the British that the colonies wanted their freedom. The lighthouse was rebuilt to similar specs in 1783 after Massachusetts Governor John Hancock requested funding for its much needed construction. Today, it is still currently in use by the Coast Guard. Visitors can take a ferry ride to see the historic lighthouse and tour around Little Brewster Island.