Writer Nicholas Sparks is known for transporting readers into the lush Southern landscapes his novels have practically trademarked. It’s only apropos, then, that the bestselling author of “The Notebook” and “Safe Haven” would enter an interview for “The Best of Me,” the latest feature film based upon one of his books, while sipping from a fresh glass of iced tea. Apparently, art really does imitate life.

“It’s not sweet tea, though,” Sparks clarifies with a smile, his North Carolina roots on full display.

The romantic dramas that comprise the bulk of Sparks’ work often depict star-crossed lovers facing difficult circumstances, but what arguably makes his stories so successful are the larger themes of destiny connecting each character. Fans enjoy the cosmic fantasy Sparks weaves within the more grounded realism of heartache and sorrow to make his stories a well-rounded experience. “The Best of Me” is certainly no exception. 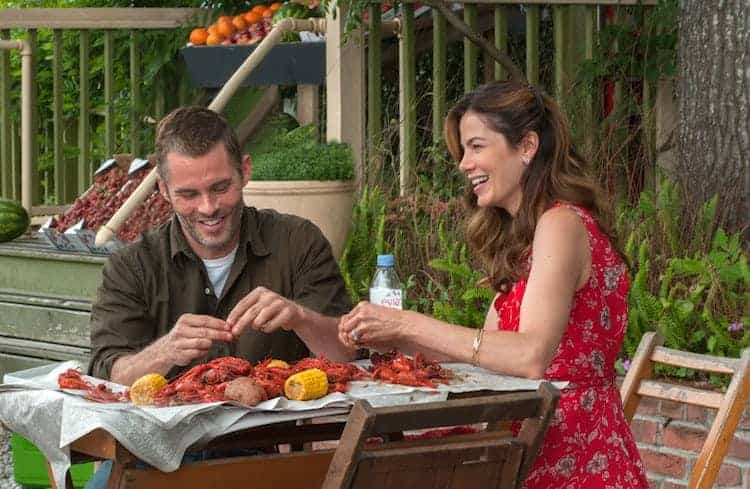 Sparks joined stars James Marsden, Michelle Monaghan, Luke Bracey and Liana Liberato, along with director Michael Hoffman, at the Four Seasons hotel in Beverly Hills this week to talk about translating “The Best of Me” from page to screen, and why the foolproof fundamentals of doomed love and ultimate redemption will always keep pages turning, and tickets selling.

Of course, in typical Sparks fashion, there was plenty of Southern hospitality to go around.

“The Best of Me” chronicles a pair of high school sweethearts separated by time and tragedy for more than 20 years, until the death of a mutual friend and mentor reunites them in their Louisiana hometown. Forced to finally acknowledge the resentful tension and unrequited longing that evolved throughout their time apart, Dawson and Amanda uncover truths about themselves and each other that will change both their lives forever. 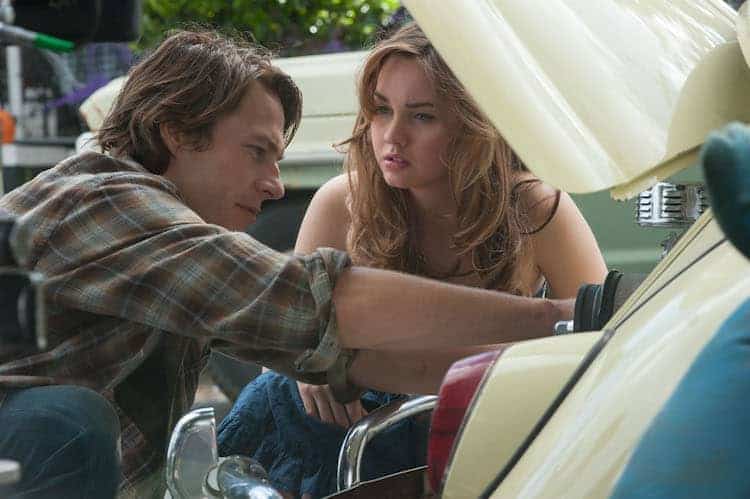 The film intertwines both time periods depicted in the story, requiring two sets of actors to play the couple at very different stages of life. As the older version of Dawson and Amanda, Marsden and Monaghan were able to use knowledge of the characters’ pasts to inform their performances. Bracey and Liberato, as their younger counterparts, however, decided it would be best to disregard their scripted future and play the teenagers with appropriately oblivious infatuation.

“That’s a responsibility that we kept in mind throughout filming. We knew from the second we signed on to this movie that if our storyline doesn’t work, no one is going to care what happens to them when they’re older,” Liberato said. “So, we wanted to make sure that our audience falls in love with our love. That’s our goal. And we wanted to put as much passion and electricity and fun into the scenes that we had.”

Bracey agreed, adding, “That’s what first love is. It’s so untainted. It’s the most beautiful thing in the world, [when] there is nothing else besides that person in front of you … It’s such a pure and beautiful and honest thing, first love. And yes, as Liana said, we were so conscious about people believing in that. It was the one thing that we really wanted to make work. And we’re glad we did.”

Hoffman discussed how the production schedule reflected plans to maintain continuity throughout the storytelling process as it balances a 20-year time gap. In addition to filming all of Bracey and Liberato’s scenes first, the director also used the younger actors’ footage to supplement Marsden and Monaghan’s subsequent preparation.

“What was kind of cool was, as part of the rehearsal process for the older couple, I could show them the entire arc of them as young people,” he began. “So, it’s almost like an actor trying to create a backstory. It was like, ‘Well, here’s your backstory, this is what happened to you. Now you have to incorporate all that into the character you’re playing.’ And that was really useful.”

Sparks explained another reason for putting initial focus on the story’s earlier chapter. According to the author, prioritizing youthful exuberance first helped form a necessary and realistic precedent for both the crew and, ultimately, the audience. That way, he said, an attachment to the characters can be established and developed well before their inevitable conflict arises.

“Let’s get invested in this couple as they’re young, so you have this vibrant burst of energy, that wonderful element of excitement, youth and joy to the set,” he declared. “It’s fun, because that’s the way we are in our lives, right? You wouldn’t want to start when they’re here now, and then go back and try to match them as younger. That would have been really hard to do.”

For Marsden and Monaghan, the primary goal to craft a believable character evolution made their experience working on “The Best of Me” all the more authentic. Both actors appreciated the filmmakers’ decision to eschew modern technical wizardry, choosing instead to present the classic tropes of first love and second chances in their purest form.

“There’s something interesting as an actor to take on a role like this, and have it just be about the human condition and relationships and complicated emotions, and have it not be about special effects or ghosts,” Marsden declared.

Monaghan nodded. “That’s the beauty of these sorts of films, it’s like a privilege to be able to go there, because I think we’re so used to shooting a lot of films … [with] a lot of bells and whistles and a lot of special effects and things like that. This really is just about the emotion. And it’s about these scenes,” she said. “So, you’re invested in these characters, and you really want to bring as much emotional truth as you can to it … We really spent a lot of time creating this emotional arc, and making sure that it made sense, and that it was truthful and based in reality, and it was grounded, and that the emotional responses were earned and deserved.”

Sparks has built a reputation for himself as a professional heartstring tugger, and “The Best of Me” certainly echoes that notion. Equal parts sad, sweet and sentimental, the epic, debatably ill-fated romance between Dawson and Amanda marks yet another swoonfest from the prolific author. Despite some critics finding his material overwrought or cliché, Sparks admitted he’s actually quite inspired by some of the most wrenching obstacles from his own past, and how channeling his grief through writing provides more cathartic closure than any predictable happy ending ever could.

“Some novels have drifted truer to life [and] are really drawn from my own personal experiences. When you’re really trying to draw on your own personal experience to make something real, you have to tap in somewhere. And that pretty much brings those old emotions back to life,” Sparks acknowledged. “I don’t think you’d be human if you wouldn’t feel that … the fears, they bubble up again. So, there are times when I have to step away from the computer because I do get emotional. And I think that to experience those emotions is to experience the fullness of life. So, I try to experience my sadness before letting it go.”

Sparks’ philosophy is certainly reflected in the emotional journey of his characters, especially Dawson and Amanda as their relationship ebbs and flows in the wake of events both devastating and dumbfounding. Although a certain suspension of disbelief is required when approaching any sweeping, fictional romance, Sparks insisted there’s always an element of truth nestled within the finished product.

“There’s something beautiful about the way that this story came about. In other words, it can happen,” he said. “There’s a lot of authenticity to this story. It isn’t always wrapped up in a little bow. But sometimes, there are different bows.”

Moviegoers familiar with the Sparks canon will undoubtedly find “The Best of Me” another worthy adaptation, but even those skeptics already stifling groans have to admit the author’s knack for a winning formula. Refreshing and bittersweet, “The Best of Me” goes down as easy as any prime Sparks story. Just like a fresh glass of iced tea.

21 thoughts on “‘The Best of Me’ interviews: Cast and crew make Sparks fly”