It’s been over a decade since Jay Ward’s infamous characters hit the big screen, but generation Z is about to get their first taste with Mr. Peabody & Sherman.

Mr. Peabody and Sherman’s are known for their WABAC machine and traveling through time to meet historical figures during Rocky and Bullwinkle’s television series.

On March 7th, the talking dog and 7 year old will hit the big screen in 3D.

I got the inside scoop on how Mr. Peabody and Sherman were brought back for computer generated animation.

If you haven’t met them yet, Mr. Peabody is the world’s smartest being (who happens to be a dog).

Sherman is a spritely boy who was adopted and raised by the dog (though in the original series, Sherman was Mr. Peabody’s owner).

With the invention of the WABAC time machine, Mr. Peabody introduces Sherman first hand to major moments in world history.

In the feature film, Sherman’s bully Penny convinces him to take the WABAC for a spin, and together they have to work their way through time to avoid wrecking the space time continuum.

An Interview with Rob Minkoff, Director

The fan following behind the dynamic duo is strong, and for director Rob Minkoff, it was important to bring Mr. Peabody and Sherman to the screen in all of their deserved glory.

“I think the first conversation was about making it as a live action film.  And then it wasn’t very long after that that it started to occur to me that maybe it would be better if it was an animation, that it would make more sense,” said Minkoff about development.

The idea was originally brought to the table in 2002 after Minkoff finished production on Stuart Little.

Minkoff and the team at Pacific Data Images (the DreamWorks subset who manufactures CGI) worked to bring the design and feel of the 2D cartoon to life in a fully animated 3D world.

Keeping the fun shapes from the 1950s cartoon meant that animators got to play with proportions to bring a fantastic set of characters to life, including stocky King Agamemnon and curvy Marie Antoinette.

After literally being years in the making, Mr. Peabody & Sherman is ready for theatrical release.

Mr. Mr. Peabody & Sherman hit the theaters in 2014 and the movie is still loved by children and adults all around the world.

And it is not surprising; with an engaging storyline, touching message, and superb voice acting it is has earned its place in the animated movies’ hall of fame.

If you have already watched Mr. Peabody & Sherman then you probably have a lot of questions, so keep reading to find the answers.

Who is the voice of Mr. Peabody?

If you are a fan of the smash-hit TV show “Modern Family” then he needs no introduction.

How old is Mr. Peabody?

The 2014 version of Mr. Peabody is seven and a half years old, which means that in human years he is in his mid-forties.

What kind of dog is Mr. Peabody?

According to one of the creators of the film, Mr. Peabody is not a purebred dog, which is why he does not resemble any specific breed.

Judging by his size and his floppy ears he is the closest to a beagle.

Although beagles don’t tend to be pure white so the animators definitely took some creative liberties.

Will there be a Mr. Peabody & Sherman 2?

There are rumors that Mr. Mr. Peabody & Sherman 2 will be released in the future (maybe as soon as 2022) but DreamWorks Animation has not confirmed this officially yet.

Who is the voice of Sherman?

Sherman was voiced by an American actor called Max Charles who was 10 years old at that time.

Max has also appeared in The Amazing Spider Man and The Three Stooges.

Who is the voice of Penny?

Alison Janney gave her voice to the main antagonist of the film, Ms. Grunion.

What is Mr. Peabody’s first name?

The 2014 film does not mention Mr. Peabody’s name but in the promotional video for the original 1960s animated TV show (where Mr. Peabody makes his first appearance) he says that his name is Hector.

Apparently he has a middle name as well, so the full name is Hector J. Peabody.

How old is Sherman?

In the film, Sherman is 7 years old.

Was King Tut from “Mr. Peabody & Sherman” a real person?

Yes, Tutankhamun (or King Tut as he was nicknamed by the modern world) was a real ruler of Egypt in ancient times.

King Tut was an Egyptian pharaoh who lived more than 3,000 years ago. He had a lot of power and ruled over the country for 10 years.

He did not do anything spectacular during his short reign.

He is mostly famous because his tomb was untouched when it was discovered by archeologists a century ago (tombs of other pharaohs had been raided by robbers throughout history).

The team of scientists that discovered King Tut’s mummy did so by scanning through the walls with ground-penetrating radar!

They found out that there are still many mysteries about this fascinating man left to uncover like what he looked like or how old he was when he died.

Yes, Leonardo da Vinci is one of the most famous artists in history and is the ultimate Renaissance man.

Before he was a painter, he was an inventor. He designed and built his own flying machine and armored car.

Da Vinci also wrote about math and science in books like “The Codex on the Flight of Birds.”

Leonardo da Vinci’s early life is not well known, but we do know that he studied art with Andrea del Verrocchio when he was young, which helped him get started as an artist.

Leonardo went on to become a master painter and sculptor during his lifetime (1452-1519).

Some of his best known paintings include “Mona Lisa” (who also makes an appearance in the animated film) and “The Last Supper.”

He also created some of the world’s most famous pieces of sculpture including “The Vitruvian Man.”

Did you know that Leonardo da Vinci liked to draw? It was one of his favorite hobbies!

Did you know that he could draw things in perspective so they looked like they were actually three dimensional objects on paper?

I bet if he had lived longer than 65 years old we would have seen more amazing artworks from him!

Did the battle of Troy from “Mr. Peabody & Sherman” really happen?

Yes, King Agamemnon was real and he really marched on the ancient city of Troy; but, of course, the actual battle did not go the way the movie depicts it.

Some people think that King Agamemnon was just a figment of Homer’s imagination, but he actually existed!

He led the Greeks in their battle against Troy.

The Trojan Horse is also true and it really did help the Greeks win the war.

Was Marie Antoinette from “Mr. Peabody & Sherman” a real person?

Yes, Marie Antoinette is a famous French queen at the end of the 18th century.

She was born in Austria in 1755, and when she was 10 years old she married the future King of France, Louis XVI.

Though they were married for 15 years, their marriage never produced an heir to the throne.

Marie Antoinette had many hobbies including playing harpsichord and riding horses with her children.

Marie Antoinette grew up with a lot of privilege and wealth which made her feel like she could do anything. She is best known for saying “Let them eat cake“.

But during the French Revolution, her voice wasn’t heard by many people because they thought she didn’t care about their cause for justice.

Sadly, Marie’s life came to an abrupt end on October 16th, 1793 when she lost her head during the French Revolution.

She was thirty-four years old wand was convicted of treason against France.

Did the French Revolution from “Mr. Peabody & Sherman” really happen?

Yes, the French Revolution was a real historical event that brought fundamental changes to the country at the end of the 18th century.

The French Revolution was a major event in the history of France. It began in 1789, and ended with Napoleon being crowned emperor.

The revolution started when King Louis XVI refused to listen to the people who were starving because they couldn’t afford food.

This led to many riots and uprisings that eventually overthrew the monarchy and established a republic (a democratic country without a king or queen).

The revolution had four distinct phases: The rise of the lower classes; leadership under Robespierre; civil war, foreign wars, and power struggles within France; counter-revolutionary efforts by royalists (those loyal to King Louis XVI) against the new regime (the democracy); and finally Napoleon’s empire.

Why did Mr. Robespierre want to hurt Mr. Peabody?

Maximilien Robespierre, on whom the character is based, was the leader of the French revolution.

He thought that Mr. Peabody was one of the French nobles which is why he wanted to put him to death.

Who wrote the soundtrack for “Mr. Peabody & Sherman”?

The score for the film was written by an accomplished American composer Danny Elfman.

He has written music for dozens of popular Hollywood films including, Edward Scissorhands, Planet of the Apes, Alice in Wonderland, Beetlejuice, and many more.

Can I watch “Mr. Peabody & Sherman” on Netflix?

The movie is available on Netflix USA. Netflix subscribers can also watch “Mr. Peabody & Sherman Show” which is an animated TV show featuring these two characters.

The show incorporates some elements of the 2014 “Mr. Peabody & Sherman” film but it is mainly based on the 1960s animated TV show.

If you live in a place where Amazon delivers, you are in luck. You can purchase the film on both DVD and Blu-ray.

You can also buy the soundtrack of the film (it was released back in 2014).

What type of scooter does Mr. Peabody have?

Mr. Peabody takes Sherman to school in his red Vespa. This scooter is produced in Italy and is very popular all around the world.

They say that Robert Downey Jr was originally cast as a voice actor for Mr. Peabody.

Unfortunately, due to his commitments to the Marvel cinematic universe he could not find the time to work on this film, so the role was given to Ty Burrell instead.

Who are Sherman’s parents?

The movie does not mention Sherman’s biological parents. We only see the adoption process.

Who sings the song “Beautiful Boy” in “Mr. Peabody and Sherman”?

The song was written and performed by a famous English singer/songwriter John Lennon.

Lennon was a member of an iconic band The Beatles but he wrote this song for his son Sean after leaving the band. 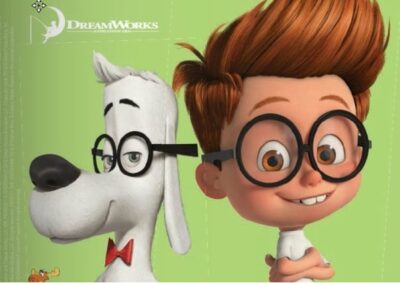 I was provided with a trip to the DreamWorks Animation campus in conjunction with 20th Century Fox. All opinions are 100% mine.

32 thoughts on “Bringing Back Mr. Peabody and Sherman”